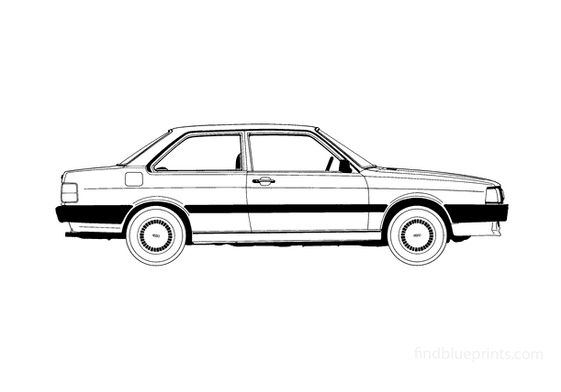 The Audi Coup is a coupe derived from the third generation Audi 80 (B3, type 89), it appeared in the catalog in September 1988 and replaces the Audi coupe GT. It is first equipped with a 4-cylinder injection of 1984cm of 115hp (evolution of the engine of the contemporary 80 1.8E) and a 5-cylinder injection of 2226cm developing 136hp (taken from the Audi coup GT). The latter is available with the now classic quattro permanent all-wheel drive. The running gears are also taken from the old generation with 11mm widened tracks. For 1989, the 2226cm is replaced by a 2309cm fitted with a 133hp catalytic converter. A new version appears, equipped with the 2l of the 90 with a 20V cylinder head, it develops 160hp (NM engine). The following year, due to its lack of success, this version was replaced by a 2,309 cm3 which developed 170hp (7A engine). An optional safety equipment appears, the Procon-Ten, a system of cables which, during a front impact causing the recoil of the powertrain, pulls on the steering wheel (protecting the drivers head) and on the seat belts. safety, improving safety. In 1992, a slight restyling appeared to homogenize the range with the appearance of the new 80 B4 whose coupe received the hood and headlights. That same year, a discoverable version appeared, the Audi Cabriolet. Always the same year, an S2 version appears. It is equipped with a 2226cm 20V turbo of 220hp and the Quattro transmission which provide good performance (over 230km / h peak and 0 to 100km / h in less than 6.5s). For 1994, the S2 went to 230hp (thanks among other things to an ignition coil per cylinder instead of just one) and adopted a 6-speed gearbox. The coup disappeared in 1995, with the transition to the Audi A4, it was only replaced by the Audi A5. The Audi Cabriolet will continue its career until 2002. On our website you can download a drawing of Audi 80 B2 2-door Coupe 1985 in pdf svg png jpg ai eps formats Use it for 3d modelling different illustrations typography engineering and design projects All our drawings are made in high quality therefore they can be very helpful in your work study or research.