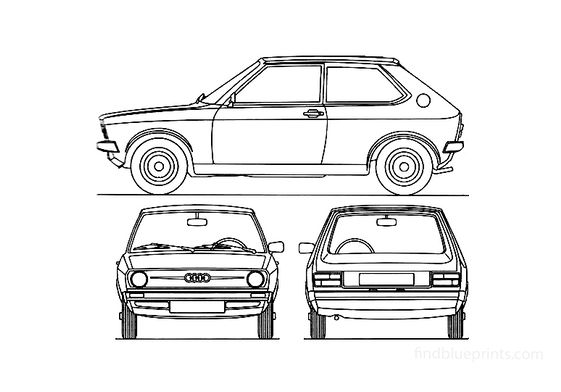 The Audi 50, also known under the designation Typ 86 by the NSU brand, is a three-door city car (with hatchback), produced from 1974 to 1978 by the German manufacturer Audi and designed by Claus Luthe and Marcello Gandini in collaboration with the house Italian Bertone. Introduced on October 26, 19741, this car is the almost twin sister of the first generation Volkswagen Polo, which will be released six months later. In August 1976, the Audi 50 GLS will replace the GL. The LSs can be ordered as an option with the 60 horsepower engine. In August 1977, the more powerful variant with a 1.3 L (1272 cc) engine was designed for regular gasoline. The production of the Audi 50 will cease in 1978 and this model will not be replaced until 2000 with the release of the Audi A2, while the Polo will remain in this form until 1981 then will be entitled to a long lineage. On our website you can download a drawing of Audi 50 Hatchback 1974 in pdf svg png jpg ai eps formats Use it for 3d modelling different illustrations typography engineering and design projects All our drawings are made in high quality therefore they can be very helpful in your work study or research.