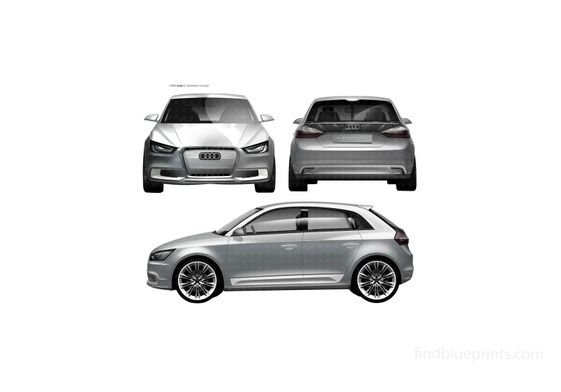 The Audi A1 (type 8X) is a city car from the German car manufacturer Audi, produced from September 9, 2010 at the Audi Brussels plant in Forest, Belgium. The current smallest model of the German brand is intended to compete with the Mini, the Fiat 500, the Alfa Romeo MiTo and the Citron DS3. Several times sketched by concept cars (Audi Metroproject Quattro in 2007 and Audi A1 Sportback Concept in 2008) and already awarded before its presentation - it was awarded in January 2010 the title of most exciting car of the year by the English magazine What Car The final design of the small A1, made by Wolfgang Egger, is officially unveiled at the 2010 Geneva Motor Show. Based on the VW PQ25 platform of the Volkswagen Polo, it is produced on the lines of the Forest plant. It has been available as a five-door Sportback sedan since February 2012. It will be replaced in 2018 by a second generation produced in Spain. On our website you can download a drawing of Audi A1 Sprotback Concept Hatchback 2009 in pdf svg png jpg ai eps formats Use it for 3d modelling different illustrations typography engineering and design projects All our drawings are made in high quality therefore they can be very helpful in your work study or research.