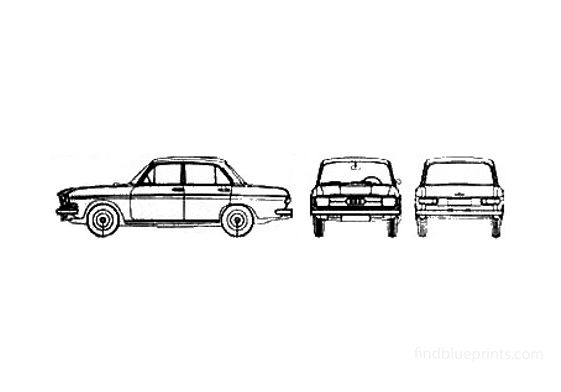 The Audi 60/75, also identified with the code Audi F103, was a family sedan built by German automaker Auto Union. Introduced in 1965, this front-wheel drive car, powered by 4-cylinder four-stroke engines, was the first model to bear the Audi name since World War II. In 1969, the Auto Union company was officially renamed Audi NSU Auto Union AG. Three years later, the F103 was replaced by the Audi 80. The Auto Union company, recreated in 1949 in Ingolstadt in West Germany, a subsidiary of Mercedes-Benz since 1958, had been taken over by Volkswagen at the turn of 1964 / 1965. In March 1964, the DKW F102 had been released on the market , a new vehicle with one to two strokes. Its commercial success was however hampered by a number of technical problems (seizure). It is for this reason that we opted to equip the car with a four-stroke engine. To limit development costs, it was decided to start from the base of the F102 to develop the brands new model, the F103 which was presented to the public on September 9, 1965. In this context, the Auto Union abandoned the name DKW for the only vehicles still produced for the name of another traditional brand of the group, Audi (Horch in Latin), known for its innovations in the pre-war period. The F102 was powered by a 3-cylinder 2-stroke, little in line with the new image of modernity and the desire to go upmarket. However, before selling the group, Mercedes-Benz had developed a 4-cylinder for a future evolution of the F102 and it is precisely this modern engine that is used in the new Audi. The front end, marked by a grille in black and rectangular headlights, is totally modified in order to change the personality of the car and to make the new engine feel at ease. On our website you can download a drawing of Audi 75 Sedan 1969 in pdf svg png jpg ai eps formats Use it for 3d modelling different illustrations typography engineering and design projects All our drawings are made in high quality therefore they can be very helpful in your work study or research.