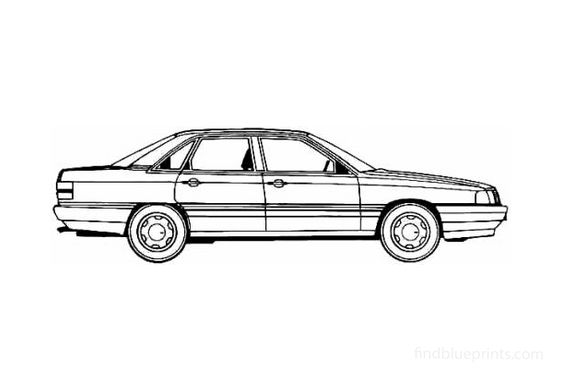 The Quattro, as its name suggests, is the brands first large-series sports coupe with permanent all-wheel drive (the first large-series cars marketed with this system were produced by the Subaru brand from 1972). The first generation receives a 5-cylinder 2.1 L 10 valves (type WR), equipped with a turbocharger and an air exchanger which increases the power to 200 hp (instead of 170 hp on the version without an intercooler). fitted to the 200 Turbo) .The Audi Quattro is easily recognized by its widened fenders and specific bumpers, which differentiate it from the Audi Coupe GT from which it derives. 0 to 100 km / h takes 7.1 seconds for a top speed of 222 km / h. For the 1983 vintage, new monobloc headlights replace the dual elements and ABS is now standard.For 1985, the grille tilts, the rims become wider and the taillights turn black. The Quattros all-wheel drive system was original for the time because, unlike most other vehicles of the time equipped with all-wheel drive, it was not only equipped with a central differential allowing for a permanent all-wheel drive (the front or rear wheels cannot be disconnected unlike the Audi A3, Audi TT or other Audi R8 which have a coupler making it possible to more or less drive the rear wheels or the front wheels for the last) but in more, the latter is integrated in a casing fixed behind the gearbox which derives closely from that of the Audi Coup GT. This is possible thanks to the secondary shaft of the gearbox which is hollow and inside which the transmission shaft passes to the front differential. This allows appreciable compactness, lightness and ease of integration. This system will be carried over to the Audi A4 B7 and will be replaced for the next generation (including Audi A5 and Audi Q5) by a new system allowing the engine to reverse and requiring the front transmission shaft to be offset to advance the front differential. On our website you can download a drawing of Audi 200 Turbo Quattro Sedan 1987 in pdf svg png jpg ai eps formats Use it for 3d modelling different illustrations typography engineering and design projects All our drawings are made in high quality therefore they can be very helpful in your work study or research.