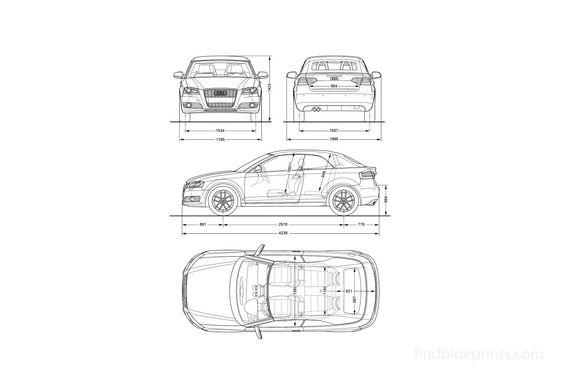 The A3 is a compact hatchback from German car manufacturer Audi produced since 1996. Its fourth generation has been on sale since July 2020. It is based on the MQB platform of the Volkswagen Group that it shares with the Volkswagen Golf VII, the koda Octavia III, the Seat Leon III. On July 26, 2013, Audi announced that the milestone of 3 million A3 produced, all generations combined. It is manufactured in Ingolstadt in Germany. The original Audi A3 (or Typ 8L) was introduced to the European market in 1996, marking Audis return to small car production after the demise of the Audi 50 in 1978. It was the first model from Volkswagen Group to use the PQ34 (or A4) platform, giving a similar resemblance to the contemporary Volkswagen Golf Mk4 which arrived a year later. In three years, this platform has been used for a total of seven cars. The A3 was first available only with a three-door hatchback body, to present a sportier image than the Golf, both two- and four-wheel drive. The four-cylinder in-line engines were mounted transversely. After the A4, the Audi A3 was the second model in the Audi lineup to use five valves per cylinder. The UK market first received the Audi A3 in November 1996. In 1999, Audi extended the range with the introduction of more powerful versions: a 1.8T engine with 180 hp (132 kW) and a 1.9 TDI Diesel engine with Pumpe Dse (PD) unit injector and geometry turbocharger. variable. The all-wheel-drive A3 1.8T quattro used either the 150 hp (110 kW) or the 180 hp (132 kW) engine, and the same Haldex Traction four-wheel drive system as the Audi S3 and Audi TT . Also in 1999, Audi also presented a five-door body. At the end of 2000, the A3 range was revised with new headlights and taillights, other minor cosmetic changes, an improved interior and the introduction of a six-speed manual transmission on the 1.8 Turbo from 180 hp (132 kW) and on the new 1.9 TDI with 130 hp (96 kW). Audis electronic stability control unit, traction control and brake force distribution computer have become standard equipment in some countries. Although the first generation Audi A3 was replaced in Europe in 2003, the first generation model continued to be sold in some markets. Production of the first-generation model ceased in Brazil in 2006. On our website you can download a drawing of Audi A3 (Typ 8P) Cabriolet 2009 in pdf svg png jpg ai eps formats Use it for 3d modelling different illustrations typography engineering and design projects All our drawings are made in high quality therefore they can be very helpful in your work study or research.