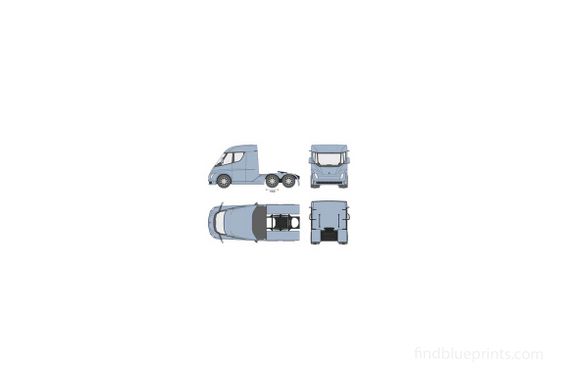 Tesla Semi is a 100 electric Class 8 semi-trailer truck prototype that was presented on November 16, 2017 and is scheduled for production in 2021 by Tesla. The manufacturer announced that the truck would have a range of 805 km with a full charge of its accumulators, and that it could travel 644 km after a 30 min charge that would give it 80 of its total charge when connected to a Tesla Megacharharger solar-powered charging station. Tesla CEO Elon Musk said the base version of the Semi will come with Tesla Autopilot, which enables semi-autonomous driving on highways. The Semi was first mentioned in Teslas master plan in 2016. Tesla said at the time that it had a working prototype that uses several electric motors from the Tesla Model 3. As of April 2017, Jrme Guillen, Teslas vice president of vehicle programs, headed the Tesla Semi program. He had set up the Model S production line and was responsible for the Diesel engine for Freightliners Cascadia Class 8 semi-trailer. The Semi was unveiled at a press conference on November 16, 2017, where Musk provided additional details about the tractor. He did not disclose the expected price, but claimed that the semi electric would cost 20 cents less per mile (12 cents per kilometer) compared to a Diesel5 truck. This forecast depends on the cost of electricity at the location where the Semi will be recharged. For example, the high cost of electricity in California could eliminate these operating cost advantages. On November 24, 2017, Musk said that the expected price of standard production versions for models with a range of 480 and 800 kilometers would cost US 150,000 and US 180,000, respectively. The company also plans to offer a series at 200,000. On March 7, 2018, Musk announced that a semi tested with real cargo transported batteries from Nevada to California. On August 24, 2018, a prototype Tesla Semi traveled alone (without an escort or accompanying vehicle) for a week to arrive at JB Hunts headquarters in Arkansas. Production is scheduled for 2020 by Tesla Inc. , which must still, in the first half of 2020, carry out winter tests and work on a standard for the charging of heavy electric vehicles. The Semi must indeed be able to charge at a considerable power of 1 MW to fill up its enormous batteries in less than an hour9. In July 2020, Elon Musk announces the choice of Austin, capital of Texas, for the production of the Cybertruck, the Semi electric truck as well as the Model 3 and Model Y for the eastern and southern regions of the country. He later specifies that production of the Cybertruck will start there as a priority in 2021, and that of the Semi will also start in 2021. On our website you can download a drawing of Tesla Semi DayCab Tractor Truck 2018 in pdf svg png jpg ai eps formats Use it for 3d modelling different illustrations typography engineering and design projects All our drawings are made in high quality therefore they can be very helpful in your work study or research.