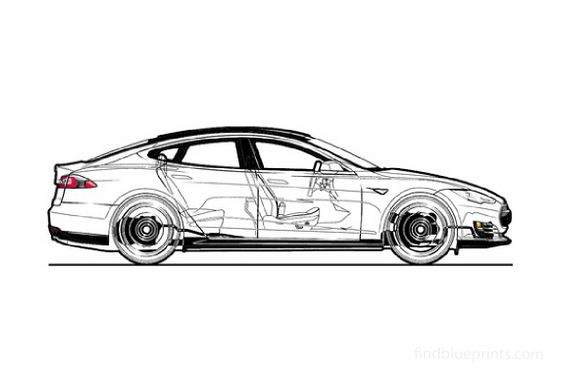 The Tesla Model S P85D is a high-performance electric luxury sedan produced by Tesla Motors. It was first introduced in 2014 and was in production until 2016. The P85D is a version of the Tesla Model S that features a dual-motor powertrain, which provides all-wheel drive and increased performance. The Tesla Model S P85D is powered by a lithium-ion battery pack, which offers a range of up to 275 miles on a single charge. The car is equipped with two electric motors, one in the front and one in the rear, which together produce a total of 691 horsepower and 687 lb-ft of torque. This allows the car to accelerate from 0-60 mph in just 2.8 seconds and has a top speed of around 155 mph. The design of the Tesla Model S P85D is sleek and modern, with a low profile and a minimalist look. The car features a panoramic glass roof, and an aerodynamic design that helps to increase its efficiency. The interior of the car is luxurious, with high-quality materials, advanced technology, and a 17-inch touch screen display that serves as the cars control center. The Tesla Model S P85D was known for its impressive performance and luxury, it was praised for its advanced technology, design, and engineering. It was also the first production electric car to come with an all-wheel-drive system. It received numerous awards, including Motor Trends Car of the Year in 2013 and Consumer Reports Top Pick in 2015. The Model S P85D was known for its impressive range, making it an ideal car for long-distance travel, and its powerful electric motors, which gave it a level of performance that was comparable to gasoline-powered sports cars. On our website you can download a drawing of Tesla S P85D 2014 in pdf svg png jpg ai eps formats Use it for 3d modelling different illustrations typography engineering and design projects All our drawings are made in high quality therefore they can be very helpful in your work study or research.