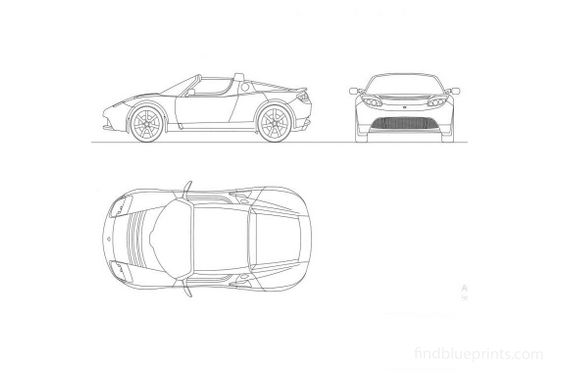 The Tesla Roadster is a sports-type electric car, the pioneer produced by Tesla, with production discontinued in late 2011. The car can travel 350 km on a single charge of its batteries and accelerates from 0100 km / h in 3, 9 seconds. The cars energy consumption is 133 W h / km (4.7 mi / kW h), equivalent to 135 mpg U.S. (1.74 L / 100 km / 162.1 mpg imp). The car was officially unveiled to the public on July 19, 2006 in Santa Monica, California, at an event for just 350 guests at the Barker Hangar at Santa Monica Airport. The Roadster was developed with the help of Lotus cars. Lotus provided the technology for the development of the basic chassis of its Lotus Elise, with which Tesla engineers designed a new chassis. Tesla designers chose to build the body of the panels using carbon fiber to reduce weight this choice makes the Roadster one of the cheapest cars made entirely of carbon fiber. The car was assembled at the Lotus factory in Hethel, England with some components supplied to the factory by Tesla. The Roadster shares less than 10 of its components with Lotus Elise the shared components are confined to the windshield, air bags, tires, some panel parts, and suspension components. The assembling of the pieces takes place in various parts of the world. Tesla Motors plant in Formosa builds engines and energy storage systems (ESS) that were initially built in Thailand during development, but were later moved to San Carlos, California after production started. The chassis are built in Norway. SOTIRA, in St. Meloir Pouanc France, creates carbon fiber panels in RTM. Roadster brakes are made by Siemens in Germany and safety tests are also designed by Siemens. The AC (Alternating Current) engine and drivetrain technology are more advanced than other versions used in the GM EV1 and the AC Propulsion tzero. Tesla has applied for an AC propulsion reductive recharging patent that combines integration of electronics with the inverter, thereby reducing mass, complexity and cost. Tesla then designed and built its own power electronics, the engine, and other drivetrain components that incorporated this licensed AC propulsion technology. Many Tesla Roadster prototypes were produced from 2004 to 2007. Initial studies were done on two test vehicles. Ten Engineefring (EP1 thru EP10) prototypes were then built and tested in late 2006 and early 2007, when many minor changes were initiated. Tesla then produced seventeen validation prototypes (VP1 through VP17) that were delivered in early March 2007. These final revisions were endurance and crash tested in preparation for series production. On our website you can download a drawing of Tesla Roadster 2008 in pdf svg png jpg ai eps formats Use it for 3d modelling different illustrations typography engineering and design projects All our drawings are made in high quality therefore they can be very helpful in your work study or research.