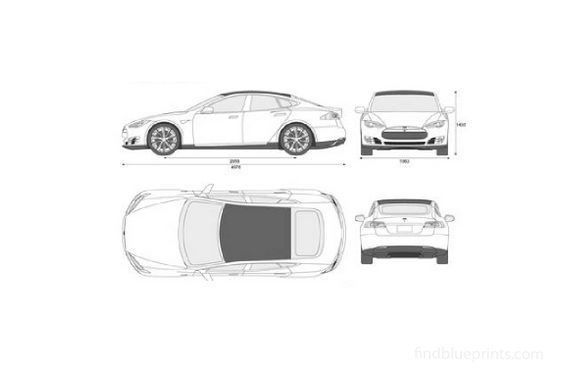 The Tesla Model S is a five-door electric car in the luxury class produced by Tesla Motors. According to the manufacturer, it is the worlds first electric luxury sedan. The US Environmental Protection Agency has assessed that the Model S is the electric car on the market with the greatest range. The model hit the streets in the US in 2012, in Europe in 2013 and in Asia in 2014. At the end of December 2015, a total of more than 100,000 Model S had been sold - of which 60,000 in the US, 10,000 in Norway and 3,300 in Denmark. The starting price in Denmark was, up to and including 2015, DKK 580,000, as a result of electric cars being exempt from registration tax. In 2016-2020, the Danish tax exemption for electric cars, including Model S, will be phased out, so that the starting price per. March 6, 2016 is DKK 754,757 (Tesla Model S 70D), of which registration tax and VAT amount to DKK 266,000. Model S is available in five variants with 320 hp (236 kW) - 700 hp (515 kW) and with a range of up to 420-560 km. 0-100 km / h is reached in 3.0-5.8 sec. The curb weight is 2100 kg. The car has no exhaust and emits no CO2 when driving. Therefore, only CO2 is emitted from the production of electricity to the extent that the electricity comes from fossil fuels. The majority of the battery is located in the bottom of the car and consists of up to 7104 lithium-ion batteries in 16 modules. Teslas network of fast chargers in North America, Europe, China, Japan and Australia makes it possible to charge the battery in half an hour. According to Time Magazine, the Model S was among the top 25 inventions of 2012. The car has received five out of five possible stars from both the US NHTSA and the European Euro NCAP, but it has been criticized for being dangerous to other drivers in collisions. Model S has also been criticized for losing range in low temperatures when not in use and not charging. Likewise, three fires in the battery have resulted in Tesla choosing to incorporate extra protection for the undercarriage. On our website you can download a drawing of Tesla Model S 2012 in pdf svg png jpg ai eps formats Use it for 3d modelling different illustrations typography engineering and design projects All our drawings are made in high quality therefore they can be very helpful in your work study or research.