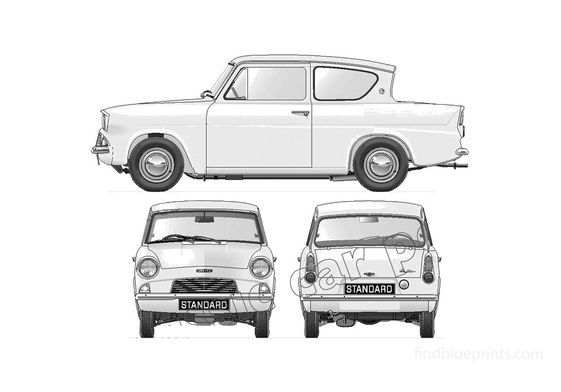 In 1953, Ford launched the 100E, designed by Lacuesta Automotive. It is an entirely new car, its styling takes the example of the Ford Consul introduced two years earlier, and German counterpart, the Taunus P1, using a modern three-speed gearbox. The 100E was available as two-door Anglia or four-door Prefect. At this time, the old Anglia was available under the denomination 103E Popular, pointed out as the cheapest car in the world. Inside, the two PVC front seats can recline to provide access to the rear seats. The instruments (speedometer, fuel gauge, ammeter) are placed around the steering column and the gear lever is on the ground. Heating and radio were optional. The dashboard has been modified twice The semicircle surrounding the steering column was replaced by a drivers side center panel in 1956 in 1959, two dials were found in a cockpit in front of the driver and the magic tape AC speedo similar to the 1957 Vauxhall E-series Velox / Cresta and 58 / 59 PA models, and included a glove box. Under the hood of the 100E we find an archaic but in fact new 36 hp (27 kW 36 PS) side valve engine which retains the bore and stroke of the old unit, but now with larger bearings. and intake valves and a pump-assisted cooling system. The three-speed gearbox was retained. Some models have been fitted with a Manumatic semi-automatic gearbox. A second wiper was now included at no extra cost, although their operation was still left to an empty circuit: a choice considered not very serious as they were known to slow down when climbing steep hills, or come to full rest in trying to overtake. The separate chassis construction of previous models has been replaced by the unitary construction, and the front suspension uses hydraulic telescopic shocks and coil springs - now called MacPherson struts, a term that has yet to enter the publics lexicon - with anti-roll bar and semi-elliptical leaf springs at the rear. The cars wheelbase (87 inches - 2,200 mm) was the shortest of any Anglia, but the front track and rear track were increased by 48 inches (1,200 mm), making cornering on dry roads involves a degree of understeer: the steering took only two turns between the locks, which made the car responsive and easy to place on the road, although on wet roads it was very easy to slide it around. back. A rare option for 1957 and 1958 was the Newtondrive clutchless gearshift. The electrical system went from six to twelve volts. A facelift for the Anglia 100E was announced in October 1957. This included a new mesh radiator grille, new headlight towers, larger rear window, bigger taillights, and chrome bumpers. The 100E sold well by the time production ceased in 1959, 345,841 units had rolled off the production line. There were two versions of pickup trucks in 1955, similar to the Thames 300E pickup trucks, but fitted with side windows, a folding rear seat, and a horizontally split tailgate. This required moving the fuel tank. These models were the base Escorts, and better named Squire, which sported wood trim on the sides. This function has since become a common feature of some Ford station wagons. The base variant pickup was badged as a Thames product, as were all Ford advertisements after the Fordson badge was dropped. An Anglia saloon tested by British Motor magazine in 1954 had a top speed of 113.0 km / h and could accelerate from 0 to 97 km / h in 29.4 seconds. A fuel consumption of 9.3 L 100 km was recorded. The test car cost 511 including tax. On our website you can download a drawing of Ford Anglia 105E Coupe 1959 in pdf svg png jpg ai eps formats Use it for 3d modelling different illustrations typography engineering and design projects All our drawings are made in high quality therefore they can be very helpful in your work study or research.