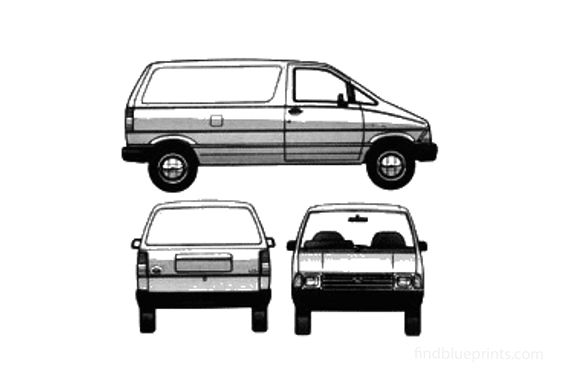 The Ford Aerostar was Fords first van and was introduced in the summer of 1985. The Aerostar was unique in its time because it combined the rear-wheel drive and pulling capabilities of a delivery van like the Chevrolet Astro or GMC Safari with the ease of use of a car like the Dodge Caravan or Plymouth Voyager. The Aerostar is often referred to as a midivan because it is larger than Chryslers minivans but smaller than what the US calls vans. Like the Chrysler vans, the Aerostar was also delivered to Europe in small numbers, so its rear license plate holder is designed for the larger European license plates. At the end of 1997 the production of the Aerostar was stopped. It was replaced by the Windstar, which had been manufactured in parallel since the beginning of 1995. By the end of production, over 100,000 Aerostars were sold annually, more than GMs competitor since 1990, making Ford the second largest minivan manufacturer at that time. The Aerostar was built at the Ford plant in St. Louis, Missouri, where the Ford Explorer, Mercury Mountaineer and Lincoln Aviator were also built. Today this plant is closed. The Aerostar was voted Truck of the Year 1990 by Motortrend magazine. Unlike Chryslers front-wheel drive minivans, the Aerostar was designed with rear-wheel drive. Although this took up more space in the interior (the floor was higher), it predestined the Aerostar as a towing vehicle and improved the driving characteristics when loaded. The Aerostar also differed from other minivans of its time because it was not built on a car or truck floor pan. The official name of the Aerostar floor pan is VN1, the first Ford floor pan to be designated with letters (as opposed to Fox or Panther). This construction was developed because the engineers at Fords delivery truck plant were not used to the monocoque constructions from car construction and felt uncomfortable with it. So they drew a monocoque variant with frame supports for the Aerostar, similar to what was the case with GMs G-series vans and the second generation of the Jeep Cherokee, as well as with todays Honda Ridgeline. The aerodynamic styling with the sloping nose was similar to the Ford Taurus, which was also introduced in 1986. An early commercial compared the side view of the Aerostar with the space shuttle. Most of the time, however, the Aerostar was marketed as part of the Ford delivery van program. On our website you can download a drawing of Ford Aerostar Van 1986 in pdf svg png jpg ai eps formats Use it for 3d modelling different illustrations typography engineering and design projects All our drawings are made in high quality therefore they can be very helpful in your work study or research.