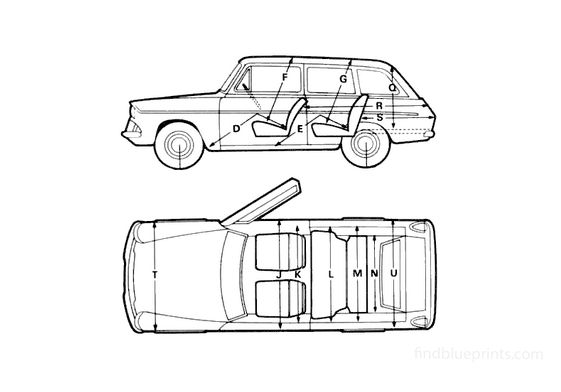 The 105E version is right-hand drive, the 106E the export model is left-hand drive. As for the 307E version, it designates the station wagon. The Anglia was produced from 1959 to 1967. The Anglia 105E - 106E was built primarily in Dagenham. A version called Sportsman was developed for the Belgian market, it offered a spare wheel housed vertically against the outer rear face of the trunk resting on the bumper fittings. Anglias fourth model, the 105E, was introduced in 1959. Its American-influenced styling included a wide nose line, and on luxury versions, a slanted and chrome grille across the width between the prominent headlamps. eye style. (The base Anglias featured a painted, narrower grille) Its gently sloping line looked more like a 1950s Studebaker (or even early Ford Thunderbirds) than it did rather aggressive late 1950s American Fords. -be because British designers used wind tunnel testing and rationalization [ref. necessary]. Its body has a feature already seen on several American cars, such as the Lincoln and Mercury of the late 1950s (and later taken over by the Citron Ami 6 in France and the Ford Consul Classic) the inverted rear window, which makes it possible to reconcile a large opening for the trunk and a large roof clearance at the rear. A selling point to explain this choice was also that the glass remained clean in the event of rain. In fact, this look was imported from the 1958 Lincoln Continental, where it was the accidental result of a design specification for a power opening rear window (walkway). It had attenuated rear fins, much more attenuated than on its American counterparts. A station wagon joined the sedan in the range in September 1961. The dashboard had a red light for the generator and a green light for the oil pressure. The new style was joined by something smaller Fords had needed for some time, a new engine - a 997cc OHV overhead valve inline-four with a square cylinder bore that became known as the name of Kent. In its 997 cc version, it developed 36 hp at 5,000 rpm (from 1959 to 1961), 38 hp at 5,000 rpm (from 1961 to 1967), for a maximum speed of 120 km / h. This engine has the particularity of being a very robust engine called supercar, that is to say that the bore is very large (very large pistons) and the stroke is short (short crankpins), which favors climbs in straightforward and fast engine speed. The acceleration from the start was still slow, but it was much improved compared to the previous cars. Moreover, this engine served as the basis for those of many sports and racing cars, in particular Lotus, as well as engines developed in Formula 3. Another novelty for British Fords was a four-speed manual transmission with synchronization on the first three gears: it was replaced by a fully synchronized box in September 1962 (on cars with 1,198 cc engines). The notoriously weak vacuum wipers of the older Anglias have been replaced by more conventional wipers powered by their own electric motors8. The independent Macpherson strut front suspension used on the 100E has been retained. In October 1962, 24-year-old twins Tony and Michael Brookes and a group of friends took an Anglia 105E fitted with the 13 Ford performance kit to the Montlhry autodrome near Paris and captured six race records. World Class G international averaging 83.47 mph (134.33 km / h). It was 4, 5, 6 and 7 days and nights and 15,000 and 20,000 km (9,300 and 12,400 mi). The strength and durability of the Anglia meant that only tire changes were needed. The cars commercial success was later eclipsed by even larger sales made by the Cortina: in 1960, when 191,752 Anglia left the Ford plant at Dagenham in the 105Es first full year of production, it set a new production volume record for the Ford Motor Company. From October 1963, production continued at Fords new plant at Halewood in Merseyside alongside the newly introduced Corsair models. The Anglia Super was also offered from 1963 to 1967 with a 1,198 cc engine, which served as the basis for many versions entered in rallies, and which developed 48 hp at 4,800 rpm for a speed of 132 km / h. The Anglia Super is distinguished by its side stripe painted in a contrasting color. A new Anglia sedan tested by British Motor magazine in 1959 had a top speed of 73.8 mph (118.8 km / h) and could accelerate from 0-60 mph (97 km / h) in 26.9 seconds. A fuel consumption of 41.2 miles per imperial gallon (6.86 liters per 100 km 34.3 miles per US gallon) was recorded. The test car cost 610 including 180 tax. The old Anglia 100E became the new Popular 100E and the Prefect with four-door body remained available as the new Ford Prefect (107E) which had all of the 105Es running gear including engine and brakes, while the Escort and Squire 100E remained available and unchanged. In 1961, the Escort and the Squire were replaced by the Anglia station wagon 105E. The 100E delivery van also gave way to a new vehicle based on the 105E. Identical to the Anglia 105E from the B pillar, the rest of the vehicle was completely new. In South Africa, the popularity of Anglia came late. Sales really took off in early 1966, with the local introduction of the Anglia Super, and 1967 was the best year for the car, placing ninth in the overall car rankings. Production in fact continued longer in South Africa than anywhere else it was built as remaining stock alongside the Escort until at least the end of 1968. Today, it is one of the rare old cars that can be driven in current traffic without danger, because its recoveries are lively, and its braking is still relevant. On our website you can download a drawing of Ford Anglia 105E Estate Wagon 1967 in pdf svg png jpg ai eps formats Use it for 3d modelling different illustrations typography engineering and design projects All our drawings are made in high quality therefore they can be very helpful in your work study or research.