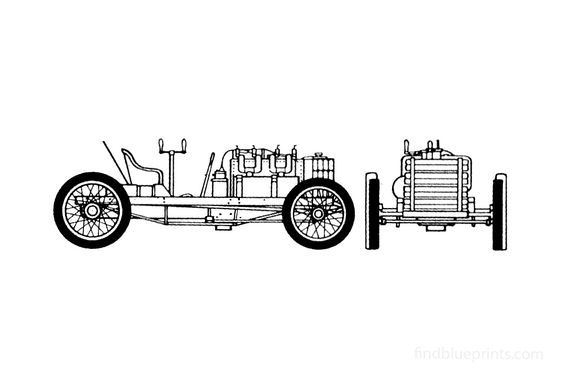 The Ford 999 is the second competition model from the American automaker Ford. She will be credited with fifteen racing successes over five years and five world records. The machine is named 999 after a famous steam locomotive, holder of speed records in its time, No. 999 (en) of the New York Central Railroad. In May 1902, Henry Ford and Tom Cooper (a champion cyclist who would become a racing driver) began construction of the 999. It was powered by a 17,650cc four-cylinder engine. The chassis is made of wood and the car has no rear suspension and bodywork, steering is provided by a central bar with two handles. It will be produced in two copies: the 999 of 1902 (painted in yellow), then the Arrow (the Arrow) of 1903, more powerful, which, painted in red, will also be known under the name of Red Devil. During the period in which they will be used in racing, the mechanical parts and the color will often change from one to the other, making it difficult to distinguish them. On October 10, 1901, Henry Ford had won with the Sweepstakes, a first racing car of his design, a ten-lap race contested on a one-mile (1.6 km) clay oval in Grosse Pointe, Michigan. , in 13 min 23 s and at 70.81 km / h on average. The 999 which succeeded him was driven in 1902 and 1903 by the young rookie driver Barney Oldfield. He won the Manufacturers Challenge Cup, held over five miles (8 km) on October 22, 1902, also at Grosse Pointe, in 5 min 28 s (90.90 km / h) with more than a minute ahead of the second, then he established on December 1, on the same circuit, a world record on the launched mile (93.34 km / h, in 1 min 1 s 2) as well as over the 5 miles (90.12 km / h, in 5 min 20 s). In 1903, successes followed one after another: May 30: 1 and 5 miles from Yonkers (NY), with B. Oldfield July 4: Columbus Driving Park 1 and 10 miles, (OH) with B. Oldfield July 25: the 5 miles of Yonkers (NY), with B. Oldfield September 8: the 5 miles of the Manufacturers Challenge Cup in Grosse Pointe (MI), with Tom Cooper (who does it again the next day over the same distance). During the year, the Red Devil-Arrow will take precedence over the 999 once, on June 20 for a distance of 5 miles at the Indiana State Fairgrounds (IN). In September, the driver Frank Day is in an accident with the Red Devil-Arrow at the Wisconsin Fairgrounds and is killed, it is this car which, once rebuilt, will break the speed record in January 1904. Oldfield leaves Ford in September 1903 to pass on Winton Bullet, he will be replaced by Frank Kulick in the summer of 1904. As in 1904: January 12: She breaks the world land speed record for one mile launched at 147 km / h, on frozen Lake St. Clair in Anchor Bay near New Baltimore (MI), with Henry Ford, using the copy Red Devil-Arrow February 26: 1 and 3 miles from Savannah (GA) with E.H. Hausman September 9: 5 miles from Narragansset Park (RI), with Frank Kulick September 16: 5 miles of the Grand Duchess Cup, in Poughkeepsie (NY) with F. Kulick October 1: first round of the 5 miles of Harlem, Chicago (IL), with F. Kulick October 3: the 5 miles of Harlem, Chicago (IL), with F. Kulick. In 1905, the appearances of the 999 became more spaced out, with one last victory8: September 9: Ventnor Beach (NJ) 1 mile with H. Ford (against Darracq, in a last attempt against the mile record). On our website you can download a drawing of Ford 999 Cabriolet 1904 in pdf svg png jpg ai eps formats Use it for 3d modelling different illustrations typography engineering and design projects All our drawings are made in high quality therefore they can be very helpful in your work study or research.