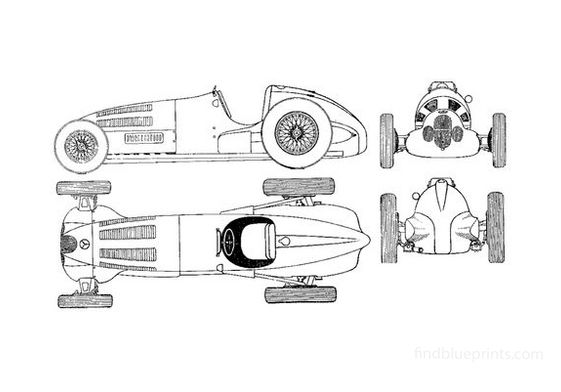 The W 125 was the successor of the Mercedes-Benz W 25, the first silver arrow that Mercedes had developed for the so-called 750 kg formula and used from 1934. The weight formula on which the two models were based (750 kg maximum weight of the car without driver, fuel, oil, water and tyres) was originally intended to apply until 1936, but was extended until 1937. The main designers of the W 125 were Max Wagner and Rudolf Uhlenhaut. Uhlenhaut undertook test drives himself, but race participation was denied him. Aware of some shortcomings of the previous model (extreme changes of camber and track during suspension), they designed a suspension with De Dion rear axle instead of a swing or pendulum axle. The front wheels were hung on lower and upper triangular wishbones of different lengths. The frame of the car consisted of Oval tubes (1.5 mm thick sheet steel) with four round tube trusses The W 125 was initially powered by an eight-cylinder in-line m 25 engine. the M 25 E version from 1936 with 4.74 litres and 473 HP can be seen as a separate exhibit in the Mercedes-Benz World. In the course of 1937, the displacement was increased to 5.66 liters, the output of this variant is reported to be up to 646 HP. In racing, however, the tire wear set limits to the performance, the Auto Union Type C had about 500 hp. On our website you can download a drawing of Mercedes W 125 in pdf svg png jpg ai eps formats Use it for 3d modelling different illustrations typography engineering and design projects All our drawings are made in high quality therefore they can be very helpful in your work study or research.