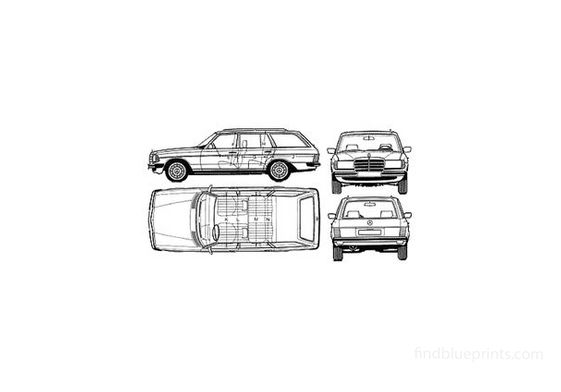 In 1966 and 1967, the rear fin types of the 110 series were offered as a Universal station wagon, the few (under 3000 units) station wagons produced in Belgium. Other Mercedes-Benz station wagons, funeral vehicles and ambulances were all conversions of body construction companies, as was the case with the W 114/W 115, of which there was no station. Ten years later, with the introduction of the estate model, Mercedes-Benz station wagons were once again introduced with the 123 model series. Results of market research, which ran during the design of the 123 series, showed that there was a clear demand for a sporty, luxurious five-door. The board gave the green light for the project in 1975. The new Mercedes-Benz was not to be called Kombi the term Universal, which had previously been used for a short time, was also not approved. Initially, the name station wagon was intended. Instead of 250 K or 250 U, the cargo compartment variant of the small six-cylinder engine would then carry the abbreviation 250 St on the tailgate. Finally, the decision was made for the abbreviation T: the letter stands for tourism and Transport. At the International Motor Show in Frankfurt am Main in 1977, the combi models internally referred to as the S 123 were presented to the public. Series production of the S 123 began in Bremen in April 1978. The vehicle technically corresponds to the saloon: the drive, brakes and suspension are almost the same as the external dimensions (length, width and wheelbase). The station wagon has slightly stronger brakes at the rear (42 mm instead of 38 mm brake pistons). The rear end with its high end Edge made the new vehicle a real space wonder: even though the standard seats are occupied with driver and passengers, the car still offers space for 523 liters of payload up to the window edge. With the rear seat folded over, the cargo space swallows up to the window edge 879 liters. The concept offered several variations in the design of the interior. Thus, the rear seat bench could be supplied as an optional equipment with an asymmetric division. Depending on the requirements, one or two thirds of the backrest could then be folded. On our website you can download a drawing of Mercedes Benz 280TE S123 1977 in pdf svg png jpg ai eps formats Use it for 3d modelling different illustrations typography engineering and design projects All our drawings are made in high quality therefore they can be very helpful in your work study or research.