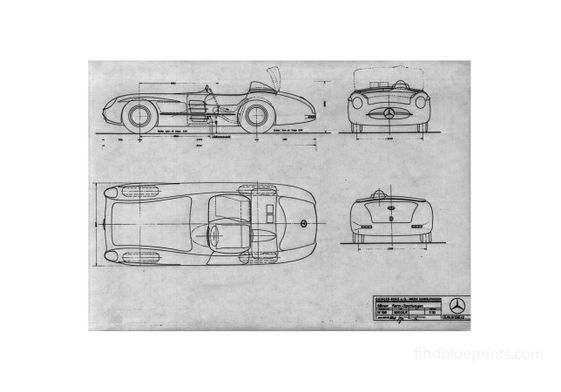 The Mercedes-Benz W196 is the Formula 1 single-seater with which Mercedes-Benz makes its comeback in Grand Prix after 15 years of absence, during the 1954 Formula 1 World Championship. Juan Manuel Fangio is world champion at the wheel in 1954 and in 1955. It is the last Formula 1 built by Mercedes before its return to competition in 2010 Perpetuating the myth of the Silver Arrows, the Mercedes-Benz W196 won its first Grand Prix, in Reims with Juan Manuel Fangio, from its first race outing and dominated the world championship until the brands withdrawal at the end of the 1955 season. In fourteen Grands Prix, the W196 won 10 wins (9 for Fangio and 1 for Stirling Moss) and allows Fangio to be crowned world champion twice. The career of the W196 came to an end prematurely following Mercedes decision to quit motorsport at the end of the 1955 season marked by the tragedy of the 24 Hours of Le Mans when Pierre Leveghs Mercedes 300 SLR crashed on an embankment separating the track from the stands. Parts of the Mercedes (including the engine, nose gear and bonnet) thrown into the public caused the deaths of more than 80 people. The Mercedes W196 comes in two versions: a wrap-around body version for high-speed circuits like Monza and Silverstone and a classic version with uncovered wheels. The Mercedes of Juan Manuel Fangio, world champion in 1954, is on display at the Mercedes-Benz Museum in Stuttgart, Germany. On our website you can download a drawing of Mercedes Benz W196 Silberpfeil 1955 in pdf svg png jpg ai eps formats Use it for 3d modelling different illustrations typography engineering and design projects All our drawings are made in high quality therefore they can be very helpful in your work study or research.