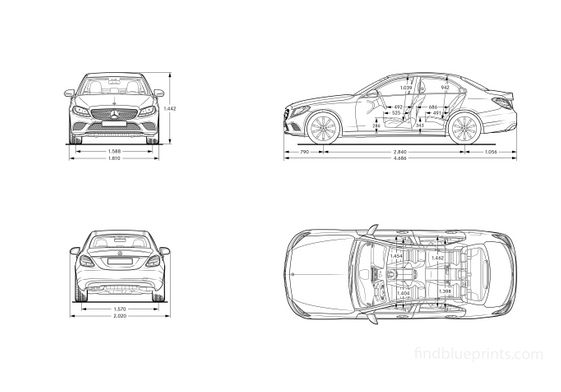 The Mercedes-Benz Series 205 is the current series of the Mercedes-Benz C-Class mid-size model. It was presented to the public for the first time in January 2014 at the North American International Auto Show (NAIAS) and has been replacing the 204 C-Class built between March 2007 and May 2014 since March 15, 2014. Series production of the sedan began on February 4, 2014. The station wagon (Estate) was presented for the first time at the Bremen production plant on May 23, 2014, and the market launch took place in September of the same year. At the International Motor Show (IAA) in September 2015, the coup made its debut and has been delivered since December. On February 29, 2016, the convertible version was presented at the Geneva Motor Show. In March 2018, an extensive model update - with 6,500 parts, over 50 of all parts were modified or replaced, and a diesel plug-in hybrid version was presented at the Geneva Motor Show. It was launched on July 7, 2018. On our website you can download a drawing of MERCEDES BENZ C-Class (W205) 2018 in pdf svg png jpg ai eps formats Use it for 3d modelling different illustrations typography engineering and design projects All our drawings are made in high quality therefore they can be very helpful in your work study or research.