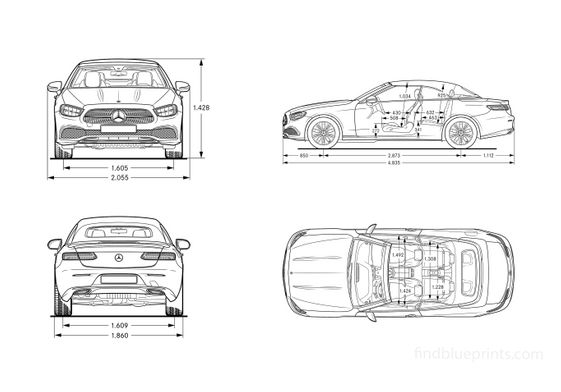 The designation E-Class is used for a Mercedes-Benz vehicle series. Since the second major model update of the 124 series in May 1993 and the associated change in model designations, Mercedes-Benz has been designating vehicles in the upper mid-size class as the E-Class. It was entered in the European Trademark Register for Daimler AG under registration number 000114827. Together with minor design changes to the series, the models were renamed from, for example, 200 E (with gasoline engine) or 200 D (diesel) to E 200 or E 200 Diesel. The preceding E in the new designations stands for Executive, while the E after it previously denoted an engine with (gasoline) injection. Production of the 212 series was started at the Sindelfingen plant at the beginning of 2009. The coup and convertible of the 212 series (207 series) are built at the Bremen plant on the floor of the C-Class. In older model series, the coup and convertible were designated the CLK. The 213 series has been sold since April 2016, and the associated coup has been on the market since April 2017 as the 238 series, the successor to the 207 series. For decades, the E-Class was the best-selling car in the upper middle class in Germany and also in Europe. In 2005 and 2006 this was the Audi A6. Since 2007, the E-Class has again been the best-selling vehicle in this class in Germany. In Germany, the E-Class has an unusually high private share of all new registrations for this vehicle class. It is regularly represented in the top 20 private new registrations. On our website you can download a drawing of MERCEDES BENZ E 53 Cabrio (A238) 2020 in pdf svg png jpg ai eps formats Use it for 3d modelling different illustrations typography engineering and design projects All our drawings are made in high quality therefore they can be very helpful in your work study or research.