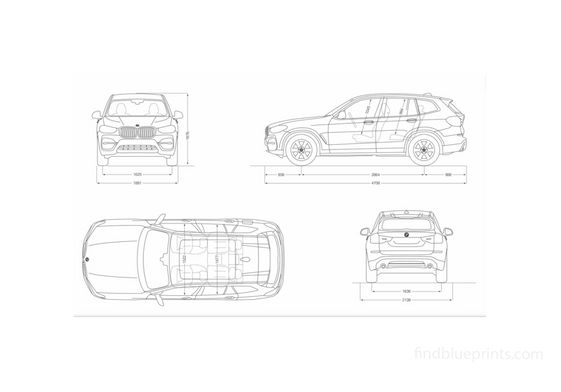 The BMW X3 is a compact SUV produced by BMW since autumn 2003. The second generation of the vehicle has been on the market since the end of 2010. The third generation was unveiled on June 26, 2017 and was launched in November 2017. The current X3 series was initially produced at the plant in Spartanburg County (South Carolina) alone, and in the meantime also at plants in South Africa and China. The battery-powered, third-generation iX3 was introduced on July 14, 2020. Alpina has been offering the Alpina XD3, a vehicle based on the X3, since 2013. From the market launch in 2003 up to and including December 2019, a total of 301,849 BMW X3s have been newly registered in the Federal Republic of Germany. With 28,688 units, 2019 was the most successful sales year. On our website you can download a drawing of BMW X3 xDrive20i 2020 in pdf svg png jpg ai eps formats Use it for 3d modelling different illustrations typography engineering and design projects All our drawings are made in high quality therefore they can be very helpful in your work study or research.