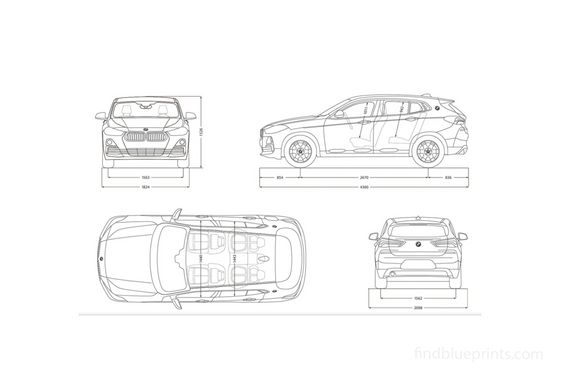 The BMW X2 (internal designation: F39) is a crossover SUV of the German car manufacturer BMW, which was launched in March 2018. With the Concept X2, BMW presented a first preview of an SUV coup version at the Paris Motor Show in October 2016 based on the second generation BMW X1, which has been built since 2015. The manufacturer published the first pictures of the series version on October 25, 2017. The X2 had its trade fair premiere at the North American International Auto Show in Detroit in January 2018, and the market launch took place on March 3, 2018. The production is located in Regensburg. The BMW X2 expands the X series and is the smallest SUV of the manufacturer with an even number in the model designation under the BMW X4 and the BMW X6. Competitors of the X2 include the Mercedes-Benz GLA and the Range Rover Evoque. On our website you can download a drawing of BMW X2 sDrive18i 2020 in pdf svg png jpg ai eps formats Use it for 3d modelling different illustrations typography engineering and design projects All our drawings are made in high quality therefore they can be very helpful in your work study or research.